HESOLAR is excited to offer the Tesla Powerwall in the near future. The Powerwall will be available this summer and we have applied to work as a Distribution Partner. 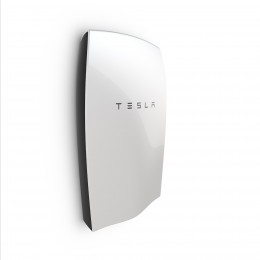 Side view of the new Tesla Powerwall.

We currently work with Tesla as an Installer for the Tesla Wall Connector and Tesla Mobile Connector. As a solar company that specializes in energy storage, we have received many questions following Tesla’s announcement of the Powerwall. The below information is not 100% correct and will change as more information the Tesla Powerwall and associated equipment is released.

How will the Tesla Powerwall work?

This question cannot be fully answered until Tesla has released an actual specification sheet and installation manual, but the current information describes the Powerwall to work as a standby battery pack with a battery management system (BMS) that works with Battery Inverters. An interesting characteristic of the Powerwall is the 350 – 450 volt output. Battery integrated inverters have traditionally worked with a much lower voltage. Popular Hybrid Inverters such as the SMA Sunny Island and Outback Radian work with a 48V battery bank. Tesla mentioned Fronius and Solaredge as compatible solar inverters in their press release.

Fronius is lined up to release a new product called the Fronius Symo Hybrid. The Fronius Symo Hybrid will have DC inputs for solar and a battery bank. Both inputs appear to have a voltage window consistent with typical solar strings and the Tesla Powerwall. This is an interesting feature when you consider that traditional battery backup systems utilized either a “Battery Inverter and Charge Controller” DC Coupled setup or the newer “Grid Tied Inverter and Battery Inverter” AC Coupled setup. The Fronius Symo Hybrid will be DC Coupled but not require a Charge Controller. The unit appears to work as a grid-tied inverter and battery inverter all in one package. This is a huge step for the cost of solar integrated battery systems.

The Tesla Powerwall and Fronius Symo Hybrid Inverter will work together alongside solar panels to provide backup power and also stabilize the grid during night time and cloud coverage. During a typical sunny day, solar energy will be used to charge the battery bank and alleviate electrical loads in the home or business. Excess solar energy will be pushed into the grid once the battery bank has been fully charged. The battery banks will then be used to provide power during peak energy demand periods and night time. The Inverter will most likely be programmable per Customer preference or Utility requirements if a rebate is involved.

The Tesla Powerwall is advertised to be stackable up to 9 units, providing 90 kWh of energy. Each unit is rated to provide up to 2000 watts continuously with a 3000 Watt surge rate. The amount of Fronius Inverters that can be stacked is not yet known. A typical Texas home will need to accommodate at least 20KW of Peak Demand. This means that four, 5KW Fronius Inverters will need to be stacked together if an average sized home or small business wants to be fully backed up.

The amount of run time on the Tesla Powerwall depends on the Consumers living habits. Most Consumers will need to backup only critical loads to save money on inverter and battery costs. The Fronius Symo Hybrid Inverter may not be compatible with residential electrical systems if the ouput of the inverters is only 3 phase. It is worth noting that Fronius also has battery pack set for release this summer that will be made of LiFePO4.

SolarEdge has not yet released a spec sheet on their bidirectional inverter. I have spoken with a SolarEdge representative and it looks like the Solar Edge battery Inverter will operate as a grid tied inverter and battery inverter in one package. The Solar Edge Inverter will require DC Optimizers which will make for a more expensive conversion for Solar Owners that do not currently have a SolarEdge System. Hopefully, the Fronius Product will have a 120/240V output for Customers that wish to retrofit an existing system without SolarEdge Optimizers.

How much will it cost to install a Tesla Powerwall?

The Tesla Powerwall is advertised to sell at $3500 for the 10kWh unit and $3000 for the 7kWh unit. I have already seen multiple reports using only $3500 to calculate the financial investment of the Tesla Powerwall. This is a mistake. The Powerwall will most likely be accompanied by at least one inverter.

Involved electrical work will also be needed. Electricians will need to reroute wires for critical loads or reconfigure the electrical service to place the inverter between the meter and main load center (which are traditionally right next to each other). There is no word currently on how much the Fronius Symo Hybrid Inverter will cost but comparable products such as the SMA Sunny Island currently cost $3500 – $4000 each.

The cost for electrical work will be harder to predict because every electrical system is unique. Converting existing subpanels will be the cheapest option while reconfiguring a service may run anywhere from $1500 – $5000. The cost of wiring and installation for the Tesla Powerwall and Inverter Equipment will vary by local electrical code, but can be expected to be between $1000 – $5000 depending on the scenario and scope of work.

The Tesla Powerwall consists of Li Ion batteries and will cost approximately $350/kWh. This is a much higher price than what we currently pay for Lead Acid batteries which is approximately $150 – 200/kWh. When compared to lead acid batteries, the Tesla Powerwall will save more money on battery cables, battery maintenance (excluding AGM and Gel), storage space, outdoor enclosures, extra life cycles, and deeper discharge abilities.

We have offered battery integrated solar pv systems for a while now and our main Customer has always made the investment to provide backup during a grid outage or for a completely off grid electrical system. The new wave of solar battery equipment is more focused on managing peak utility loads than providing backup power for Consumers.

With this new focus comes an increased demand in Utility and Government sponsored rebates. California has already begun a battery rebate program and other Utilities may soon follow. The peak power compatibility of the Tesla Powerwall and Fronius Inverter are a great help to electric utilities because they reduce the need for expensive peak power plants. Many Utility Companies currently provide rebates for solar for this same reason.

More questions need to be answered to address possible challenges for the Tesla Powerwall.

We have many questions that cannot be answered until we know all the features of the Tesla Powerwall and compatible inverters. A big question is whether backup power will always be available. If the battery bank is being discharged at night to assist the grid demand, the state of charge may be too low to provide power during a grid outage. Solar Inverter Features may limit the capabilities of the Tesla Powerwall.

The Fronius Inverter specifications we currently have show a 3 phase output voltage which will not be compatible with most residential homes. The biggest challenge will be the price of the system, most Consumers will want to see a return on investment. Backup capabilities will need to be prioritized for Consumers that do not have an incentive from the Utility Company and Utility Companies will need to assist this new technology with rebates and special peak pricing.

How does it compare to current systems?

When comparing battery technologies, the Tesla Powerwall is much more impressive than traditional Lead Acid Batteries.

Another exciting battery technology. Aquion is made of environmentally friendly chemistry and operates at a traditional 48 volts.

Lead Acid Batteries have long ruled the solar market because of the ruggedness and predictability. Manufacturers have delayed the integration of Lithium Ion because of fears of overheating and fire risk. The Tesla Powerwall is a unique situation because the batteries have been proven to work safely as the power source for Tesla Vehicles.

Lithium Ion costs more per capacity but more if it’s capacity can be used when compared to Lead Acid. Deep discharge of Lead Acid can ruin the batteries and severely reduce the lifetime cycles of the battery. Lithium Ion can manage deep discharges while maintaining a long cycle life. Other companies, such as Fronius and Enphase, are launching LiFePo4 batteries, which offer much of the same benefits as Lithium Ion.

When comparing solar integrated battery systems, the Tesla Powerwall currently looks to be better suited for integration with Utility peak demand programs. The high voltage output of the Powerwall is not yet compatible with traditional Battery Inverters that specialize in backup power (SMA Sunny Island and Outback Radian).

The backup features of the Fronius and Solaredge Inverters are not yet clear. We hope that the new inverters will still offer a generator input and programmable features for off grid Consumers.

Ready to Start? Get a FREE Quote